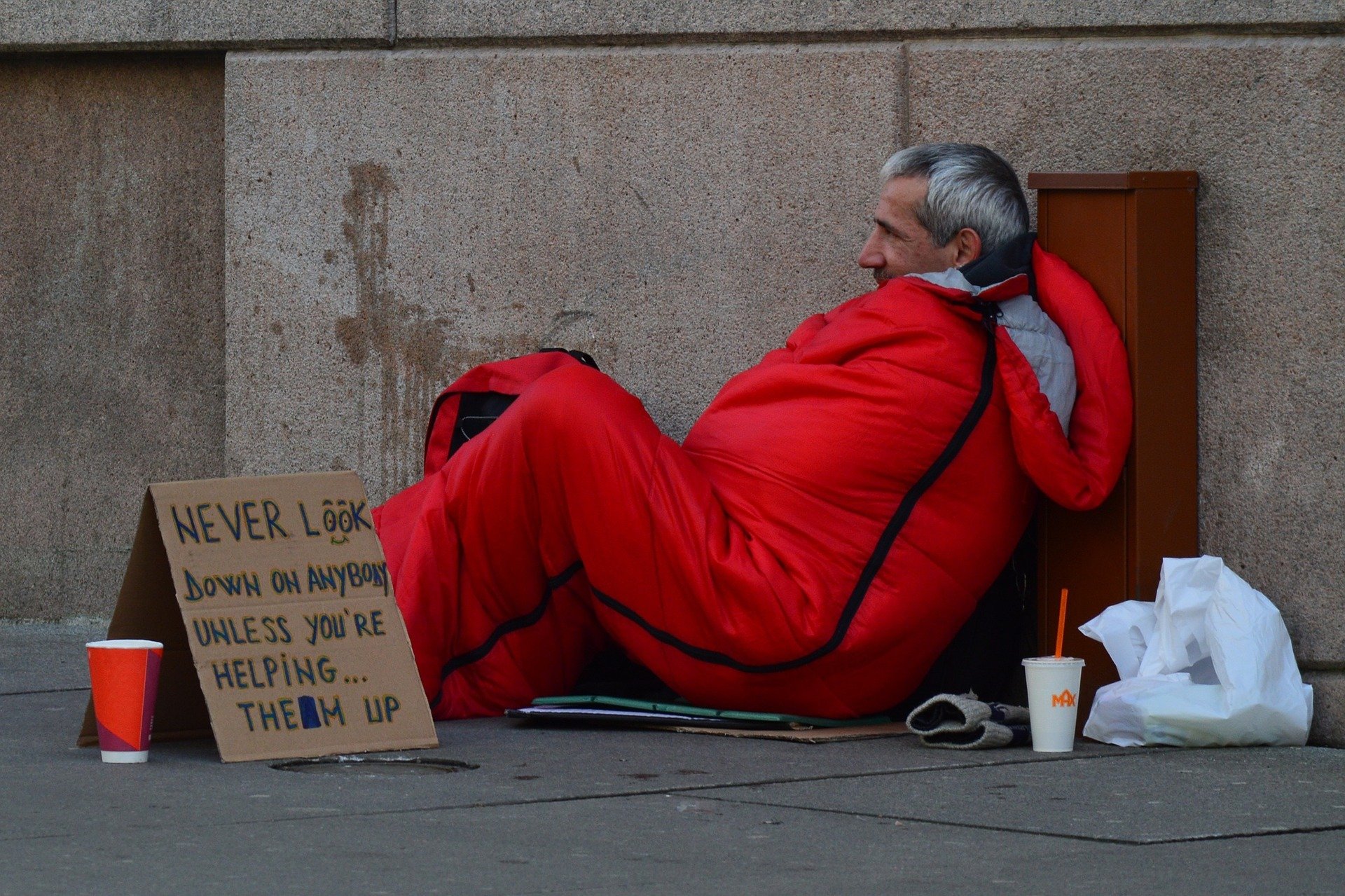 Many Christmas stories begin with; It all began one Christmas Eve… This one does too but continues throughout the year. It is a Christmas story that is an Evergreen.

The homeless crisis does not take a break during Christmas. If you have not been touched by the homeless people who live on our streets, in our alleys, in our subways, or on our park benches you must be visiting from another planet. Earthlings are very loving creatures who like to play games like Random Acts of Kindness, and Paying it Forward which seem to attract the attention of our Higher Power. By the end of this article, you may want to play, too. Let’s play it with the Homeless during Christmas.

Welcome to Earth. We are glad you are here. Let us introduce you to the Homeless.

So please allow us to share with you some of the wonderful things the people on this planet do to help the less fortunate known as Our Homeless, (yes, we claim them) and some of the Homeless Stories that carry the thread of Universal Oneness and Universal Love. Sometimes that thread is quite tattered and torn, but it still holds true.

It is easy to judge the Homeless at first glance, but, less so when a story has a face.

“It all started one Christmas Eve in 2015 at a Church Service in Tampa, Florida,” Beth Ross began as she shared her story of blanketing the homeless on the Kat Kanavos Show, posted at the end of the article for your viewing pleasure. “The church generously gave every family $100. to go out and do something good. In January we were to return and tell the congregation what we did with the cash. As soon as the money was in my hand I know, I wanted to buy blankets for the homeless.” Beth Ross said.

“I stopped off at Trinity Café where meals are served to the homeless every day, to meet my friend Cindy Davis, the Director at the time, and asked her how many people they served daily.”  “About 285 people.” She said. I was amazed. “What if I collect about 300 blankets to pass out on Christmas Eve?” “That would be great!” Cindy answered. When my husband heard I wanted to collect 300 blankets, he said, “Where are you going to get that many blankets”? He had a good point, but I had an idea.”

Beth Ross created a Facebook Page, on which a poster reads, “Faith it ‘till You Make it.” Packages arrived from Georgia, Wisconsin, and Arizona.

“Together, they held a generous 308 blankets! More than I had asked for. It was so exciting to receive so much kindness from total strangers that we could all Pay Forward! That Christmas, as promised, we passed out blankets to the homeless guests at Trinity Café. The light that we saw in the guests’ eyes inspired us to continue the program and Blanket Tampa Bay.” Beth said.

Florida is a winter home to many Earthlings known as Snow Birds who avoid the cold.

However, the city of Tampa is the Frost Line on our planet where temperatures can drop below freezing. During those nights the homeless are at risk of freezing to death in their sleep. The homeless have become such an everyday sight on our planet that we often pass them by without even seeing them.

We step over their “begging cups” and with faces hidden behind long dirty hair, or tucked beneath a hood plucked from the trash; we do not take notice of their pain.

The plight of the homeless has become so commonplace in our world that we have become numb to their suffering until we look into their pained eyes, the window to their God-given soul. The glimpse can touch and connect us to Universal Oneness and activate thoughts like, “This was, or is, someone’s cherished child. What the heck happened? And, if this can happen to them, but by the Grace of God, this could have happened to me.” Perhaps, it is that last fear that makes us turn away, and hurry past the outstretched hand on a dark, frigid night.

Fearless Beth does not ignore hands. She stops and covers them with blankets of love.

When the curtain of hair is pulled back, and the smudged face revealed, what do the windows-to-that-homeless-soul show us?  What does Beth see? When the suffering-silent speak what do they say? What is their story? What happened!

The stories shared with the show’s audience included one of saving someone from certain death that involved an unexpected eviction after a funeral, a broken hip, and a broken heart.

Alone in a manger, no room at the….

“I found Charles alone on a wooden bus bench two years ago.” Beth began. “After seeing him there two days in a row and offering him blankets, water, and snacks, he told me to leave him alone. On the third day, I pulled into the parking lot behind him and watched as people got off the bus in front of him. They wouldn’t even make eye contact with him because he was a “bum.” He was lying down on the bench now and appeared to be in bad shape. I called a friend of mine who works with the Homeless in Tampa Police Department Office (Dan McDonald) who came and “Baker acted” Charles to St. Joseph Hospital.”

A saga began to emerge as Charles recovered enough to share his story during recovery.

“We found out Charles had a broken hip and Renal failure and had been staying on that bench for four days. He had surgery to repair his hip and fix his kidneys. After spending several weeks in the hospital, he was sent to a rehab facility.”

When I visited Charles in Rehab, I asked him why he was homeless?

“He said he was married, and his wife owned a home. Her daughter was on the mortgage. When the wife died, the daughter kicked him out. There was no room for him. You never know someone’s story. If Charles had been an injured animal, someone would have taken him in.”

Everyone has a story to tell, so don’t judge a book by its cover.

“While in rehab, we found out Charles had been an employee of Pinellas County Schools for 30 years and had a pension. His Social Security was filed. Now Charles lives in his own apartment.” “The Dr. said if I had not found him when I did he would have died on the bench.”

Another story that touched the hearts of the audience was about the man who wanted nothing for himself in terms of food or blankets, just food for his “very best friend in the whole world,” a stray dog. “Just give me dog food.” He told Beth.   They were two strays bonded by experience and attached at the heart. This homeless pair watched over each other on those cold, dark, and potentially dangerous nights. But, because they had each other, they were no longer lonely. Beth fed the dog and blanketed and fed the man, too.

What began as Christmas Blankets has become a yearlong, full-time job because the need is so great. “We pass out Blankets at Trinity Café every Christmas Eve as well as provide supplies to approximately 150-160 homeless men and women every Monday night at St Peter Claver Church in Tampa,” Beth explained. “Why would someone choose to do this day in and day out for the past three years?” I asked Beth. “Because of the heart-wrenching stories that go with the blankets,” She answered.

I had to agree. I was hooked by the stories.

Which brings us back to the beginning of our this story for our “Other-World-Visitors.

Earthlings are very cautious yet, emotional and generous beings. If they understand someone’s plight, they will give more than what is asked of them because they are all connected by Universal Oneness and can feel the other being’s pain and love.

We also like to play games where we turn Crappy into Happy.

One such game is called Paying it Forward which is a form of throwing love and goodwill to the wind with the belief that our Higher Power or the Universe will make sure it gets to the right place. We really like to do that. Another of our favorite Human games is Random Acts of Kindness, like putting money in a stranger’s parking meter that is about to expire, or sending blankets to people in need who we will never meet, see, or would even be able to get a Thank-you from, even if we wanted one.

Yeah, it’s totally random, and we Humans love it!

“This year Dennis J. Pitocco, Founder, Publisher & Editor-in-Chief of BizCatalyst 360°  and Founder / Chief Encouragement Officer of GoodWorks 360° along with his wife Ali will be joining Beth Ross on Christmas Eve in Tampa for Blanket Tampa Bay. They will join other Earthlings to Pay It Forward as they Blanket Tampa Bay with life-giving warmth for the homeless. Come play with us at Blanket Tampa Bay. Blanket Tampa Bay is a 501c3 Charitable Organization. working to help the homeless by providing Blankets as well as hygiene products. To learn more, please visit Blanket Tampa Bay or if you have questions, email Beth at Beth@BlanketTampaBay.com.

Please enjoy the short 15-minute VIDEO Podcast – Beth Ross knows that behind every homeless person there is an important story, and she shares some of them on the Kat Kanavos Show while explaining the goals of Blanket Tampa Bay.