Why Don't We SEE The Homeless? 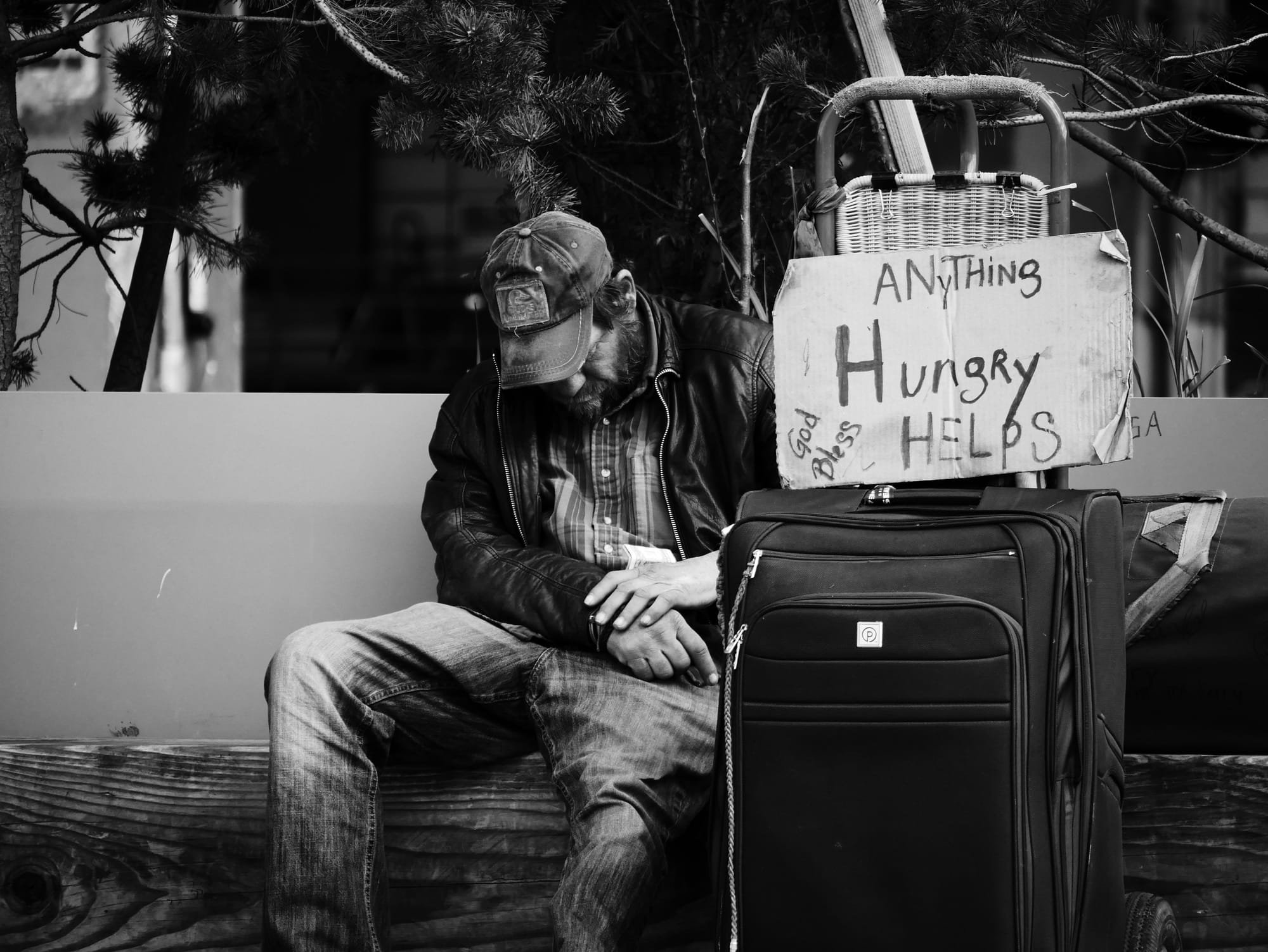 The homeless are everywhere in California:  They sleep in doorways in Berkeley,  pitch tents at the Downtown Library in San Diego,  camp out along the freeway on-ramps in Sacramento. They ride BART (Bay Area Rapid Transit) with children in tow, begging for spare change from commuters.

Their plight is met with disdain by some, generally ignored by most. We simply refuse to SEE them. It’s as if in pretending they don’t exist we don’t have to admit the failure of our society to offer basic human care. Admittedly, in an effort to not contribute to their addictions, I stopped giving money to panhandlers many years ago, sending my donations instead to the local food pantry and Habitat for Humanity. And like most on the train into San Francisco, I avoided eye contact with the woman who drags her two-year-old along as she pushes a cardboard sign in commuters faces pleading for money to feed her four kids.

The begging mom, a toddler in tow,  moves on to the next car. The next day a black man in his mid-twenties decries my white privilege when I shake my head no to his ask, continuing by him, undeterred.

From behind my sunglasses, I watch jaded adults ignore her. I feel ashamed when a teenage boy sitting alongside his mother pulls a wad of crumpled dollars out of his pocket and offers them up. The boy’s mother touches her son’s face in a flush of pride for his caring heart but doesn’t open her own wallet. The begging mom, a toddler in tow,  moves on to the next car. The next day a black man in his mid-twenties decries my white privilege when I shake my head no to his ask, continuing by him, undeterred. Yet his rage eats at me. For days I cannot get his face out of my mind.

I know I must change my response. But how?

A young Latina sits on the sidewalk outside Trader Joe’s with babe in arms as I exit. I am compelled to slip her a couple singles. An elderly Asian woman pushes a shopping cart filled with her worldly possessions along the sidewalk toward me. Meeting her gaze I say hello. Her eyes dance, smiling toothlessly, she comments on the beautiful weather. She is happy the smoke-filled skies are no longer. She seems grateful just to be acknowledged.

Later, sitting in the sunshine at the Ferry Terminal in San Francisco,  I am approached by an elderly Caucasian man wrapped in a sleeping bag. I offer to buy him a meal at Starbucks.  Excitedly, he drops his belongings in a chair at my table and follows me indoors, picking a fruit box and a small cup of coffee. His humble gratitude brings me to tears and yet my discomfort is palpable:  I just want him to take his food and go. I cannot look at him as he picks his personal effects off the adjacent chair and moves away. I feel better about my response but not much. If all emotion comes down to either love or fear, I can easily recognize that this is not love I feel..

What is it about the homeless that scares us?

Is the fact that we think they are mentally unstable? It might be. Many, if not most, of the chronically homeless, suffer from a physical or mental disorder.  That makes it hard for them to find and/or keep a job. No job, no money. No money, no home. Pretty simple math. The spiral denigrates further no belongings, no clean clothes, no shower, no dental hygiene, no community, no relationships, no self-esteem.

And I have to ask: How soon would I be talking to myself?

Perhaps we fear their down-on-their-luck, no-fixed-address decrepitude is a virus that we may catch. How many of us have known lean times? When an auto repair or an unexpected medical bill could tap us out?  How many of us have missed a credit card payment? Car payment? Mortgage payment? 29% of United States households have less than $1,000 in savings. It must be said that we are much closer to living their existence than that of the celebrity millionaires and billionaires we worship.

The true measure of any society can be found in how it treats its most vulnerable members.

In my homeless musings over the last month, I’ve been reading about homeless veterans. I have never been around anyone who served so their world is pretty foreign to me. But I feel outraged and sickened by the fact that our war machine took these boys (and yes most were KIDS when they served) and stole their souls. These guys came back torn apart physically and emotionally. Many could not acclimate. Couldn’t hold down jobs, so no money…no money, no home…the exact description of what creates homelessness. Giving life and limb, our veterans are saddled with the horror they experienced and get to relive every day.  Yet we let them go without a roof over their head and 3 squares?

There are over 552,000 homeless on a given night in America.  Roughly 40,000 of them are vets. Mostly single and male, according to the National Alliance to End Homelessness, 54% of them have a mental or physical disability.

It should be further noted that the face of the homeless veteran is changing. Women are now serving in combat. And many military women are considered Head of Household. So now we are adding the CHILDREN of military veterans to the street. I can’t help thinking that THIS is the true cost of war…the tortured souls we created and then abandoned.

Each of us doing our part

I am not policy maker yet I can see there is no easy solution to this exponentially growing problem. What I do know is that ALL human beings are predisposed to companionship and affection.  Our lack of understanding, compassion or empathy for those less fortunate does not serve us. Seeing homeless as lazy ne’er do wells who chose this life through their drug addiction says more about who we are than who they are.

Somehow we must see ourselves clear to treat the disadvantaged with human decency. And that means SEEING the human under the unwashed exterior.While we may not be able to help all the indigent,  perhaps we can make a difference for one.

Today I am filling my backpack with granola bars and apples in anticipation of the street people I will encounter. I only hope I can be brave enough to smile and offer an encouraging word.

What small act can you commit to?

If you can’t feed a hundred people, then feed just one.