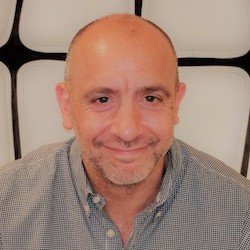 "For the secret lesson of remapping yourself, as I was finding, is that you eventually grow wary of the flat and easy, the commonplace and self-reliant. You begin to crave the depth, the heights and the extremes. You begin even to crave the fear."

Robert Grabel is excited to join the VIP Team at 360 Goodworks to support nonprofits in their efforts to maximize their impact. Robert made a career change to the nonprofit world in 2001 after spending more than a decade in banking and finance.   With his focus on making a difference in the lives of others, he transferred his skills and passion into the nonprofit sector.  Leveraging his ability to present big ideas and drive philanthropic efforts, Robert has raised millions in support of senior care, homeless services, education, healthier lifestyles, youth development and services as well as the fight against heart disease, cancer and type 1 diabetes.

With nearly two decades in the nonprofit arena, Robert has done everything from launching his own start-up charity to serving in senior leadership roles. His proudest accomplishment was launching his own nonprofit called Teens Run Westchester where distance running was utilized to help young people learn about setting and achieving big goals.

He is a passionate advocate for the nonprofit sector, writes and speaks on a wide range of industry topics through his newsletter and blog New Thinking from Nonprofit Now! He also volunteers for youth development and health organizations in his own community, Southwest Florida.  Robert launched Nonprofit Now! Consulting and Coaching to provide organizations and their leaders with the consulting and coaching support they need to change the world. You can learn more about his work and at www.yournonprofitnow.com and www.robertgrabel.com

Robert lives in Fort Myers with his wife and dog.  He loves visiting his daughter and family up north in Philadelphia and New York.  He enjoys writing and playing his own original music and is a consistent and patient (a.k.a. slower!) runner and cyclist.  Robert has completed 16 marathons and nearly twice as many half-marathons in support of youth development, heart disease, dementia and other causes.